What does a FinishLynx operator who spends his year timing meets do during a global shutdown?

Many in the timing community know Roger and his father Tom Jennings as they were some of the earliest adopters of the Lynx timing systems. So it comes as no surprise when we receive an email from Roger saying that he’s rebuilt a period-correct computer and has connected the Lynx Silver Bullet to it and a scoreboard. Even better, it’s capturing images.

You can read more about the beginnings of Lynx and how Tom and Roger played their role in our 25th Anniversary blog post. 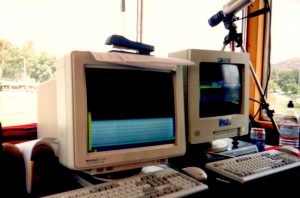 Roger’s original computer was purchased in 1990. It was an Intel 386 running at 25mhz, 2 megabytes of RAM, and a 80mb hard drive. It had a SCSI (Small Computer System Interface) controller card which was used to communicate with the FinishLynx timing box — these were also used as a controller card for high-end internal and external hard drives at the time.

At the time the initial beta (alpha?) release of FinishLynx, finish image was limited by the amount of RAM in the computer. There was no disk cache or toggling on/off of image, so you would hit the space bar and FinishLynx would capture an image until RAM was filled up, then it would display the image. I used to have a little chart that would let me know how much image length (in seconds) I could capture at different frame rates. I think I could squeeze 30 seconds out of the slowest frame rate setting. If the race finishers didn’t fit within that time/RAM limit, they’d be looking for hand-times. However, even in the limited form, FinishLynx was already far, far ahead of anything being used for fully automatic timing in the US.”

The next FinishLynx beta release allowed the toggling off/on of image capture, even though I was still limited by my measly 2mb of RAM, it was a game-changer, allowing my former 30 seconds of image, if done correctly, to 1-2 minutes of finishers. To get more image it was as simple as buying more RAM — which I did from 2mb to 8mb (the maximum for my computer). Not a cheap investment in 1992, it was about $45/megabyte, but it’d quadruple the amount of image I could capture, a major investment for me at the time.

By the end of the summer in 1992, FinishLynx added hard disk cache to the image capturing which enabled a seemingly endless amount of image length (limited to the size of the hard drive). Also FinishLynx had full integration with database software (Clerk of the Course) and scoreboard displays, television running time clock/results.

This iteration was fairly similar to the functionality of the FinishLynx of today, it was light years ahead of anything else used in the US or Internationally.

My 2020 computer that I used in my modern test was the exact same system, with an upgrade to 8mb of RAM and a 100mb hard drive.

With a mission to build a period-correct computer that could run the original Lynx Silver Bullet, Jennings took to eBay and the local Goodwill to find the equipment. While some of the original hardware is more difficult to locate than others, he was miraculously able to score a monitor at Goodwill for a mere $5 that was slated to be tossed. Because so much was unknown in the early days of computers, there hadn’t been any product standardization yet. This makes finding RAM that much more difficult, because each generation of computer had a new type of chip. In the end, Roger’s rebuilt computer is a nearly exact replica of the computer that he first used almost three decades ago. 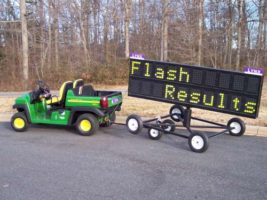 With his restored computer set up, he was able to connect the Silver Bullet and a Seiko display board (from the 1998 Nagano Winter Olympics), and was off to the races (so to speak).

The backward compatibility of Lynx products has always been a key focus, and Roger’s latest project is the ultimate example of that backwards compatibility. With it, systems that are purchased can be added to and expanded as needs grow over the years without the need to buy a completely new system. While we’re not saying you’d necessarily time your next track meet with a 27-year-old Silver Bullet, we think it’s pretty remarkable that you could.

Thank you to Roger Jennings of Flash Results for sending these images & story!

Do you have your own timing-related hobby or story to tell? Email marketing@finishlynx.com to be featured on our blog.